Update: the licence plate application has since been refused. The reason given is that they don’t allow offensive messages. All I can think of is that they misread it as being “GOP HER,” which doesn’t mean anything but they may have assumed it was some code, new slang or something.

I live in Quebec and only recently the province opened registrations for personalized license plates. At first I didn’t even consider it, but this morning I impulse-bought one: 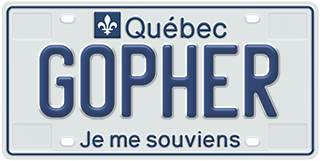 This will of course be a homage to my favourite mascot, Go’s.