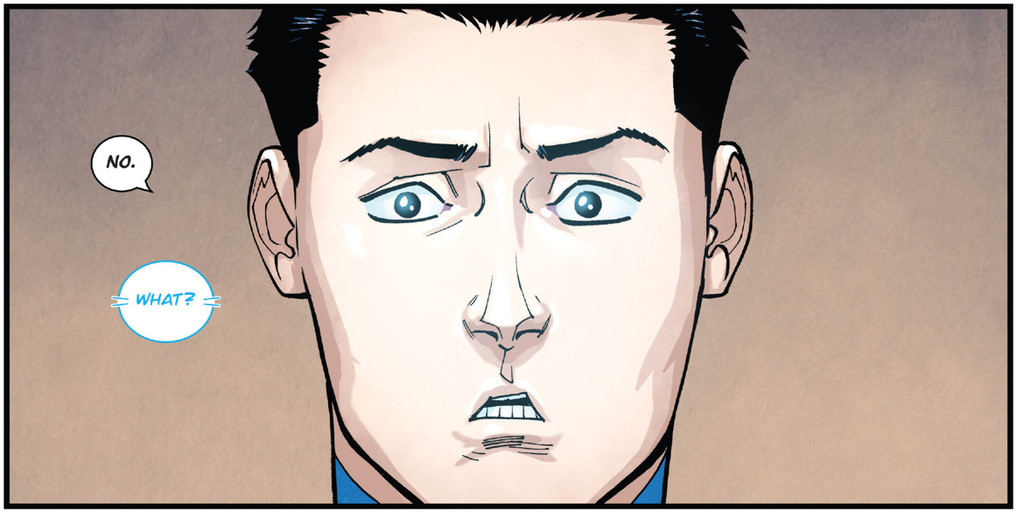 From the very beginning, Robert Kirkman maintained that Invincible was his attempt at doing the whole superhero thing right. There is a running gag in this book that on every cover (at least for a lot time if not since the beginning), they take a little jab at the superhero genre as done by other houses.

As news appeared that there would be a reboot, Kirkman was quick to declare that he was not going to be a dick to his readers and would not erase the whole timeline. By calling the arc “REBOOT?” with a question mark, he could not have made this more clearer. Also, the cover tagline:

And so we reach the end of the arc and Kirkman did keep his promise: the timeline was not erased. But maybe it should? That is the question that he leaves us with.

Mark is taken back to just before he gets his powers. He then deals the best he can with what he knows is coming: Nolan’s attempt at conquering the world for the Viltrumite Empire and the consequent deaths of so many in the process. That’s the “hero stuff” and although it’s well done, none of it will matter.

Mark has also to deal with being young again, living with his parents. His wife of many years now barely knows and definitely doesn’t care for him. And his daughter wasn’t born yet. How do you deal with this?

During the first two issues of the arc, Mark’s personal life was mostly a B plot. But in this final issue, it becomes central.

Mark gets a chance to go back to his original timeline, to his wife, to his daughter. But he’s asked for a sacrife. A hero’s sacrifice.

The beings that brought Mark here explain that by setting himself in another path, he can fix the future, he can fix all the things that happened to Earth in the original timeline. All he has to do is make the choice. But he says no. Mark wants to go back to his wife and daughter. There is nothing that can make him change his mind.

He doomed his planet and he is a disgrace, they say. I can leave with that, he responds and goes back only to find desolation where the battle against Thragg is apparently finished – and apparently lost — I suppose we’ll learn more about that soon.

And of course, Kirkman had to throw one extra punch at the guy. As a father, the reveal at then end of what Mark has lost is heartbreaking.

Invincible remains the only book that has never once disappointed me in any of its arcs. This is amazing for a story ongoing for over 10 years and 126 issues.

Now excuse me while I go hug my daughter.