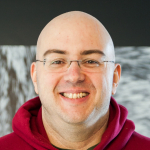 Hi, I’m Roberto Selbach Teixeira, a journeying software developer (and dad!) This is my little neck of the webs.

I currently live with my wife and daughter just outside of Quebec City, Canada.